Success! Now just check your email to get your download. 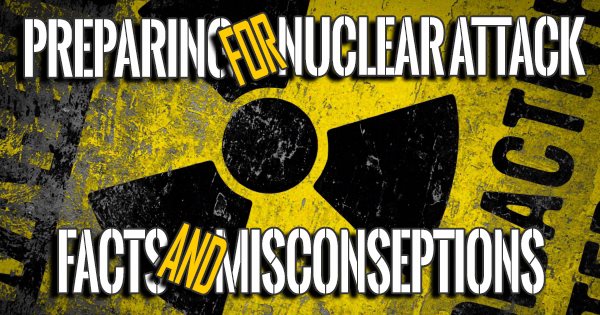 With North Korea and Iran flexing their muscles and telling us how much they love us here in the United States, and with Russia acting like a drunk guy at the bar just looking for a fight with his buddy China, the threat of a nuclear attack on U.S. soil doesn’t seem that far fetched these days.

Prepping for a nuclear attack and trying to survive a nuclear disaster is really what started prepping back in the 60’s with the Russians and the Cuban missile crisis. Even though dropping a bomb on Hiroshima ended World War 2, it also made other countries take notice and say “Hey! I want one of those!”

Even though they didn’t use the word “prepping” back then, and I’m not sure who actually coined the phrase “prepping” the principals were the same. Today the stakes are much higher, today there are threats like pandemics, terrorism and financial crisis that people living in the 50’s and 60’s would have laughed at.

Technology has advanced so much since then that the game has changed. We are not worried about what country has the capability of producing a nuke, we are worried about which countries and which extremist groups.

Even though the perception of preppers is of us wearing the now Iconic gas mask, thanks to shows like Doomsday Preppers, the reality is this is one area quite a few of us are lacking in. Other than some a few extras, the supplies are basically the same, the important part is knowing the facts about surviving a nuclear disaster, and the possible impact it will have on us. 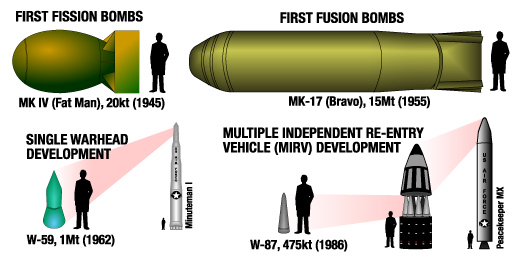 Before we start to plan on how to survive a nuclear strike, we need to know what some of these weapons will do. Even though the nuclear bomb dropped on Hiroshima was devastating, it is small potatoes compared to what is possible today. And even though countries have been scaling down on their nuclear weapons, we still have the ability to decimate a country many times over.

Reference: A nuclear weapon’s explosive power is measured in yield, which is expressed in tons of TNT. 1 Kiloton = 1,000 tons of TNT, and 1 Megaton = 1 million tons of TNT… A little hard to wrap your head around right?

Fission: This type of nuclear weapon is commonly referred to as an Atomic Bomb, these can be as small as 1kt (Kiloton) up to several hundred Kilotons. The bomb dropped on Hiroshima in 1945 was 15 kiloton’s, and the second, dropped on Nagasaki, was 20 kiloton’s.

Fusion: These are thermonuclear weapons or H-Bombs (Hydrogen Bombs) with extreme explosive powers are obtained through the process of nuclear fusion. H-Bombs are nearly all achieved through the initial detonation of an atomic bomb or combination of fusion and fission.

Without getting too technical it is the process of forming a heavier nucleus from two lighter ones. This fusion requires incredibly high temperatures. This article here explains the process in more detail.

The website NuclearSecrecy.com has what they call a Nuke Map which allows you to pick from several size nuclear bombs, and then detonate them (virtually of course) in your area. You can set the wind direction, air burst or surface detonation, and get a good idea about how much damage each weapon will do.

Dirty Bombs: These bombs are what you might see from terrorists, a “dirty bomb” is a conventional explosive, such as dynamite or C4, with radioactive waste mixed in that scatters when the bomb goes off, but it is not a nuclear bomb. The bomb can kill or injure people through the initial blast of the conventional explosive, and then through the dispersal of the radioactive materials.

Using the Nuke Map I linked too above will give you a good idea about what damages you can expect depending on how far from ground zero you are, but the one thing this Map doesn’t do is simulate multiple strikes.

If you live in New York and 1 bomb is dropped you might be OK if you are far enough away. If 10 bombs are dropped strategical to produce the most damage, the situation will be completely different.

Now that we know what kind of destruction to expect from these nuclear weapons we need to think about what targets are in our area. ki4u.com has a list of nuclear bomb targets listed by state, Click here to see the targets in your area.

There are quite a few factors that go into how much damage a nuclear strike will do, but anything inside 1 mile will be completely destroyed, and if you happen to be within 10 miles of the blast you might survive, but probably not for long.

Bomb size, weather conditions, wind direction and decay rate all play a factor in the residual damage radiation and fallout can do.

A misconception about nuclear fallout and radiation is that it hangs around for months or even years. While this is true for the area where the detonation happened, it is not true for the outlying areas of the blast zone.

Radiation has a half-life, and without getting too technical about different kinds of radiation, most people use the 7/10 rule to calculate the decay rate. The 7/10 rule basically means that the radioactivity decreases by the power of 10 after 7 hours. 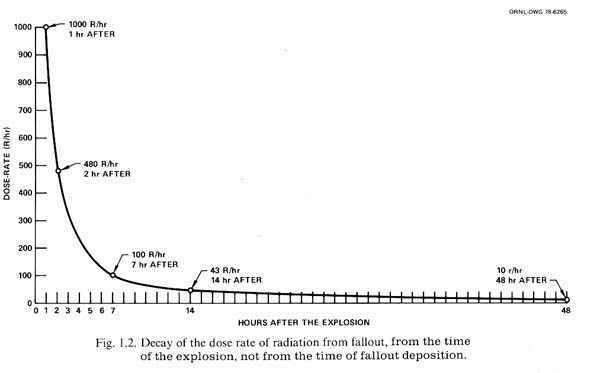 As you can see, when you watch movies like Blast from the Past where people spend years in a fallout shelter it just isn’t true. If hundreds of bombs were dropped on the Unites States it would be devastating to the environment, but most of the damage would last far after the radiation was gone.

Here are a couple other misconceptions about radiation and fallout…

How to Prepare for a Nuclear Strike

Stay or Go: The first thing you need to think about is whether you are going to shelter in place, or get out of dodge. If at all possible the safest thing to do is to stay put because this is where you have your supplies, and who knows what you will encounter on the road.

This might not be an option if you are too close to ground zero, or you are downwind of the blast site. There are also other factors that need to be considered like your personal security and safety if everything and everyone around you is in chaos.

If you do decide to shelter in place you need to know how to protect yourself from the radiation and fallout. If you have the means to build a fallout shelter or even a simple root cellar that’s great, but this is not an option for most of us.

Here is a chart that explains how easily radiation travels through certain materials, or how thick each material need to be. 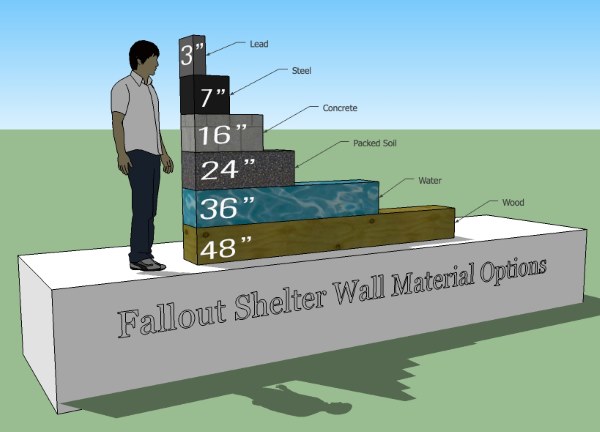 If building a fallout shelter is not an option you will need to build a temporary fallout shelter somewhere in your home. You probably won’t be able to use just 1 material, so you will have to use a combination of materials and hope for the best. 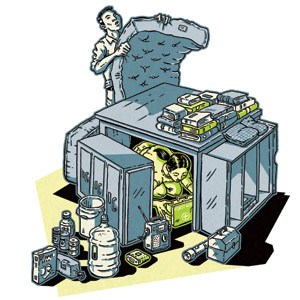 Find a place in your house that is already the most protected. This could be the basement because it is already underground, or under a stair case. You can even build a “survival fort” for lack of a better term to put more material between you and the radiation. Books, cloths, blankets or anything you can find will be helpful.

Keep in mind, this will be very uncomfortable regardless what you do, and you will be spending at least a couple of days stuck in your survival shelter with your family members, but desperate times call for desperate measures.

Late Comers: Another very real possibility is having to let family members in if they arrive late. These days most families are separated throughout the day because of work or school, and you might only have minutes to prepare for something like this.

Unless you want to tell them “sorry about your luck” you need to have them strip down and clean up before you let them into your safe area or you risk the possibility of them bringing in radioactive material.

I found 2 great videos from BuildAnArk.net that goes into much more detail about this and more. They are fairly long, but I suggest you watch them because they explain everything you need to know about nuclear preparedness.

Most of our preparedness supplies overlap into a nuclear disaster scenario. Our first aid supplies, food storage and water storage will be necessary, but there are a few supplies that we need just for this scenario.

All joking aside, these are the Geiger counter of choice by preppers everywhere because of their low cost, and their effectiveness.

These can be as low as $25, but they need to be calibrated in order for them to be 100% accurate. Calibration will cost around $100, but this is the most reliable route to go for the price. This website can calibrate a Geiger counter for you. 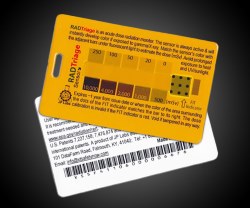 RADTriage Radiation Detector: These look pretty cool, and as a matter of fact I just got a couple from eBay

to put in my bug out bags. These will not give you the option of taking multiple readings during a nuclear attack, but they will be useful to tell you if you are in the wrong place at the wrong time.

The down side of these is that they only last for 1 year, but that shelf life can be extended up to 5 years if they are kept in the freezer until they are needed.

Smart Lab Cell Phone Radiation Counter: I haven’t used this, but from what I have heard and seen on YouTube they will do the job. This cell phone radiation counter

will not be as sensitive as the CDV meter, but they are convenient and incognito compared to the CDV meters. I also have one of these on the way from eBay. 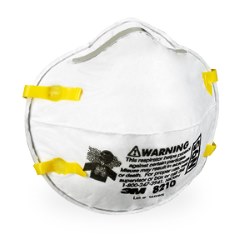 N95 Masks: These are not necessarily just for a nuclear attack, but you want to make sure you have some of these around.

Why are N95 masks and not a regular surgical mask? Surgical masks are not designed for use as particulate respirators and do not provide as much respiratory protection as an N95 respirator. 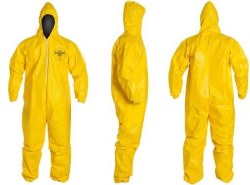 Hazmat Suit: If you are trying to protect yourself from nuclear fallout you will want to cover every part of your body leaving no exposed skin. A hazmat suit is inexpensive

and convenient because it is one full piece.

A hazmat suit is another item that will be useful in multiple scenarios, it separates you from anything that wants to get inside and do you harm. Some other useful supplies are…

Lisa also wrote an article recently that goes through a few things you can do if you are exposed to radiation. Keep in mind, these are not the “be all end all” solution, but they might help in a situation where there is no help. You can read that article here.

As you can see a couple of nuclear bombs doesn’t necessarily mean the end of the world, but hundreds of them very well could. The thing that concerns me more than the actual bomb dropping is what led up to it, and what comes next.

At the very least, if we understand how to survive and avoid radiation poisoning, we will live to fight another day.

Survival and being prepared should not only be a passion, it should be a lifestyle. The definition of a prepper is "An individual or group that prepares or makes preparations in advance of, or prior to, any change in normal circumstances, without substantial resources from outside sources" Like the Government, police etc.
I don't believe that the end of the world will be the "end of the world" I believe it will be the end of the world as we know it now.
You can also find me on Google Plus and Twitter 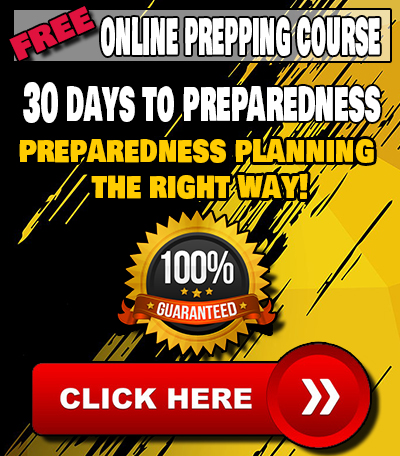 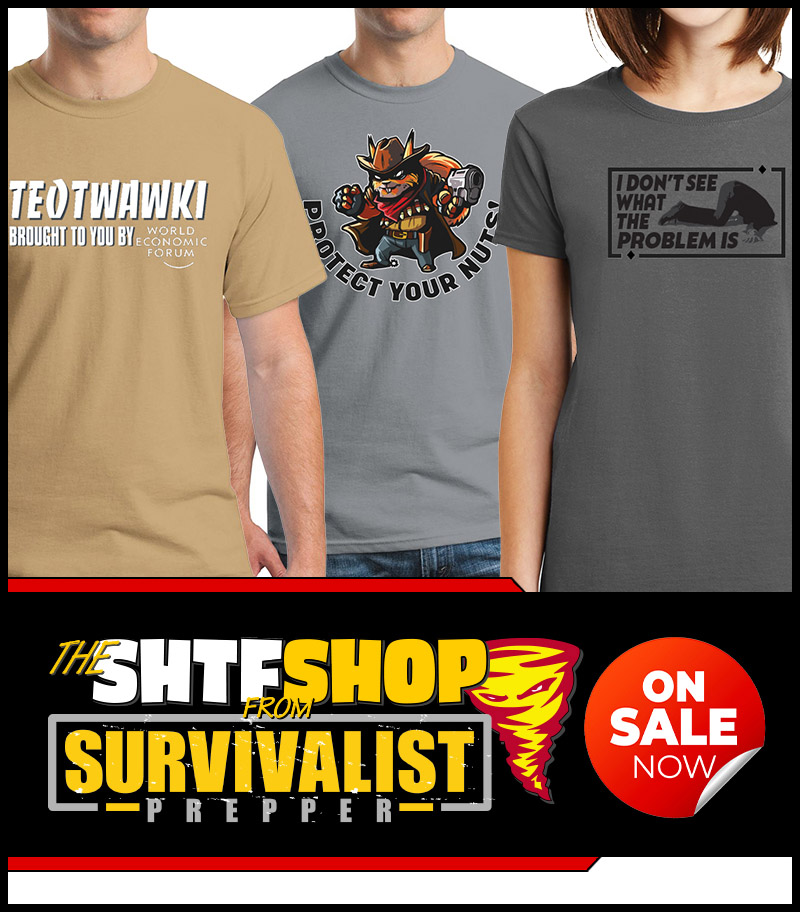 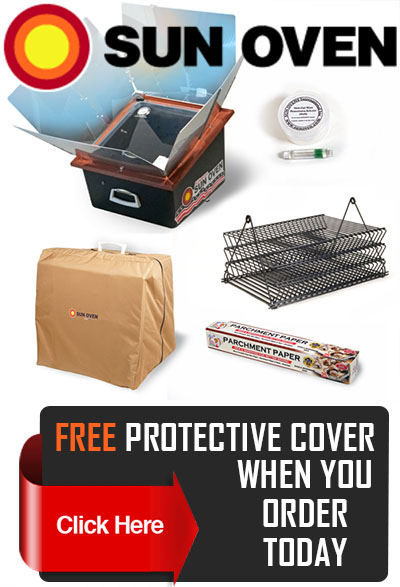 BUILD YOUR BUG OUT BAG… 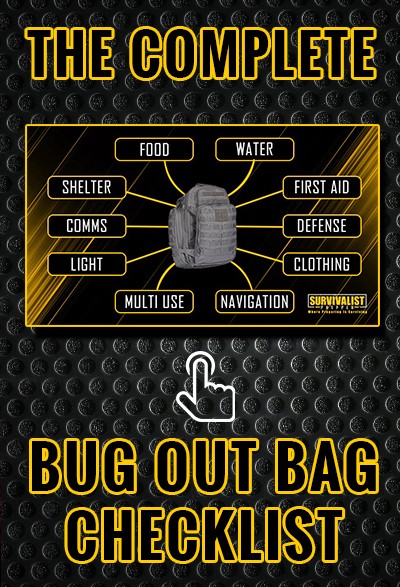 WHAT ARE THE MOST IMPORTANT SUPPLIES? 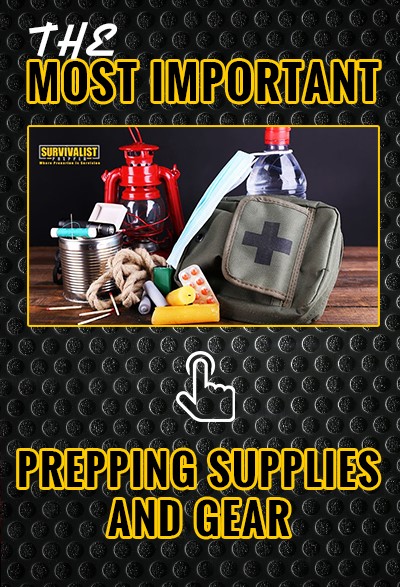 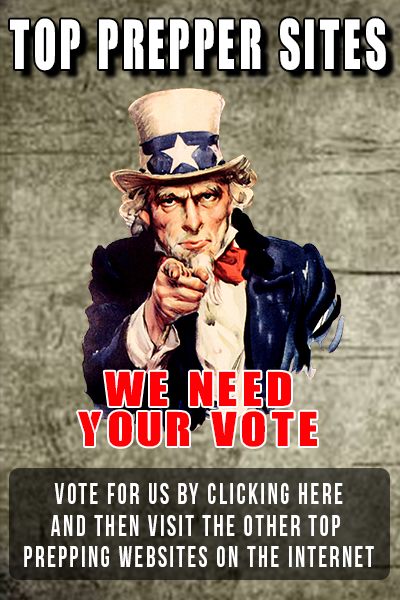 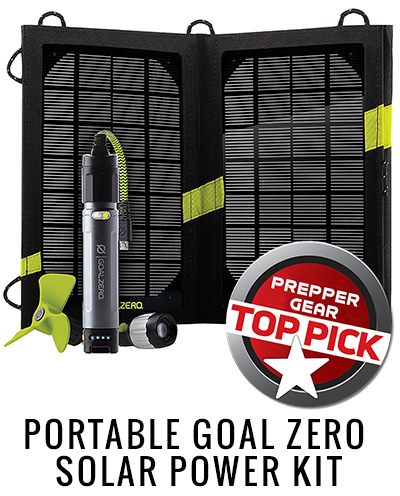 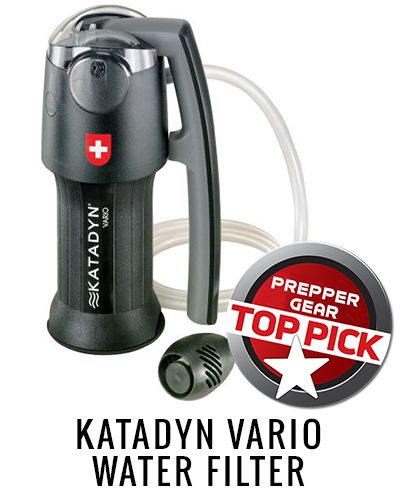 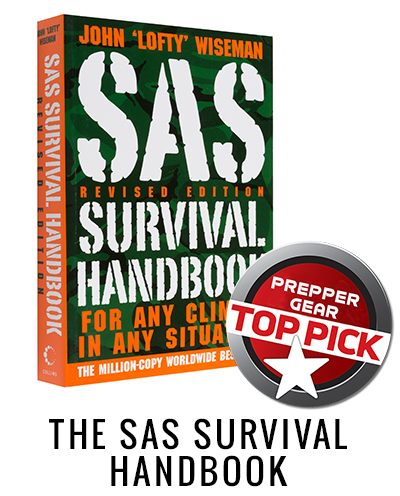